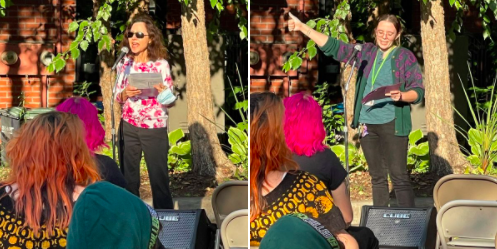 Family Planning CEO Debra Marcus was joined by two members of our Community Education team, Kasia Swift & Jessica Reed, as #TeamFamPlan took part in Saturday’s reproductive justice rally in Oneonta. Both Debra & Kasia were also given the opportunity to address the crowd. And thank you, Jessica, for sharing some of your photos of the day!

The event was one of more than 600 protests and marches nationwide last weekend held in response to the recently passed Texas anti-abortion legislation — the most restrictive in the nation — which was allowed to go into effect by the U.S. Supreme Court last month.

“Generally, people in Otsego County — we serve four counties, soon to be five — are supportive… But it’s important that people stay informed and involved and communicating with their legislators to make sure they know that it’s vital to continue fully funding reproductive health care and access to high-quality care, regardless of insurance or immigration status.” —Debra Marcus, Family Planning Chief Executive Officer

Read The Daily Star’s full report on the rally.