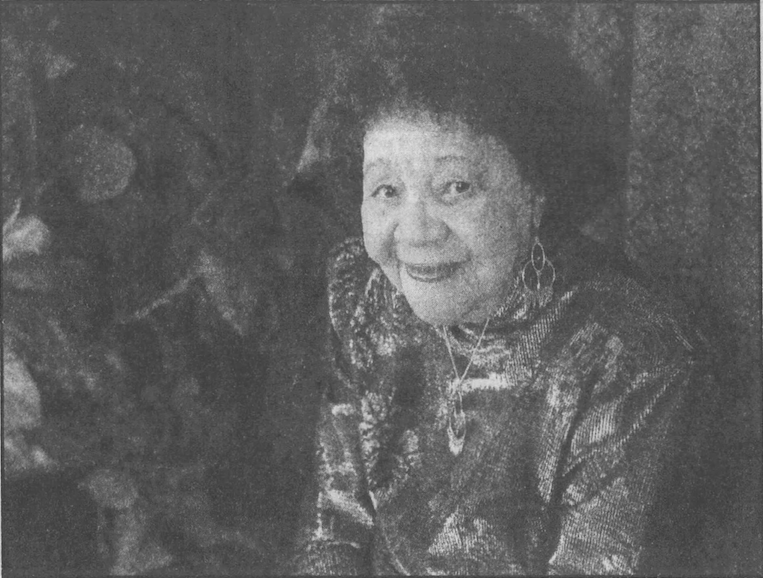 It’s Women’s History Month! And every Tuesday this March, we will be honoring the vital, integral contribution of local women to our local communities all across south central New York — by highlighting some of the history surrounding their lives and their stories.

It was January 1937. And Beccye Lightford had just received her first paycheck from the Binghamton Public Library.

The young, recently widowed woman stood in the ladies room, and cried.

They weren’t tears of joy or happiness, or even of relief. They were tears of anger and frustration — but also resolve.

Beccye had applied for an administrative position at the library several months earlier, and she had earned the top score on the civil service exam.

Now, however, the check she held in her hands was less than the standard clerical pay rate she was supposed to receive — and had been promised prior to beginning the job — set and required by the civil service.

A Black woman in Binghamton

But the lower amount wasn’t due to an error or an oversight. It was intentional.

Beccye was a Black woman living in the city of Binghamton during the mid-1930s.

And, like most of the country at that time, there were no Black women working in administrative positions alongside their white neighbors, much less taking the civil service exam.

In fact, Beccye was the first Black woman to do so in the city.

Instead, Black people were expected to fill lower-paying service jobs, working as cooks and cleaners and caretakers — not a “white-collar” position like a librarian.

And so, the head librarian said Beccye could either take the lower-paying check or she could just leave.

“That just broke my heart. I cried,” she told the Press & Sun-Bulletin for a feature story in 1985. “But I knew if I walked out, every black person would be accused of doing such things.”

Beccye had relocated to the Southern Tier with her first husband, the Rev. Alfonson Lightford, from Key West, Florida in 1933 after he was named minister of the Trinity A.M.E. Zion Church in Binghamton.

That next year, however, Alfonson died.

And Beccye found herself in late 1934 not only heartbroken and alone, but unemployed and saddled with the knowledge that she would eventually have to move out of the parsonage following her husband’s death.

The Binghamton church her late husband had led now also found itself without a leader.

Her faith and the future of the congregation of vital importance, Beccye’s first step forward was to bridge that gap, serving as A.M.E. Zion’s interim minister for the next several months until a new minister could be hired.

But what about establishing a career all her own?

The Louisiana native had graduated from the University of New Orleans with a degree in education, and she taught in the classroom during her time in Florida.

That’s why the Binghamton Public Library seemed like the perfect fit for a young, intelligent well-educated woman to begin a new career.

Beccye knew there were positions open at the library. So she took the civil service exam and applied.

When she finished first on the test, she was confident she would soon be offered a job. But as the days, weeks and months passed, no offer came. She was puzzled.

“I couldn’t understand why I hadn’t gotten the job if I tested well and there were openings,” Beccye told the Press & Sun-Bulletin for a feature story in 1974.

Eventually, after looking into the status of her application, she learned why.

“I learned of the fear — the fear of the staff, the fear on the part of the community and the board of trustees — about hiring a black librarian,” she told the Press & Sun-Bulletin in 1974.

Once she was eventually hired, it would take Beccye two years of fighting for her right to equal pay for equal work, but she did finally receive the correct civil service pay scale for her librarian’s position.

It also took time for the Binghamton library’s staff, leadership and patrons to work through their fear and prejudice towards accepting a Black librarian among the busy building’s books and shelves.

But the cold shoulder Beccye initially received from her coworkers did eventually thaw, with the whispers, nudging and looks fading over the years, replaced with warm memories and valued friendships.

In fact, when Beccye married her second husband Claude Fawcett in 1942 — a marriage that would last for more than 50 years — Binghamton’s head librarian at that time Helen Stratton insisted the couple hold the ceremony at her home.

“Mutual fear and mistrust” made those early years difficult for the young librarian and her supervisor, Beccye told the Press & Sun-Bulletin in 1974.

“[But] Then, we became very good friends,” she said.

Beccye Fawcett retired from the Binghamton Public Library in 1974 after working amongst the building’s books and carts and shelves for close to four decades.

During her career she worked her way up the ranks, eventually serving as the principal library clerk.

Throughout those years at the library, and even after in retirement, civic engagement and leadership were also an integral part of both Beccye’s and her husband Claude’s day-to-day life.

For Beccye, that included working with the Broome County Urban League, NAACP, the Mayor’s Advisory Committee on Urban Renewal in Binghamton, Broome County Office of the Aging and Empire State Federation of Women’s Clubs — with Beccye founding the federation’s Binghamton affiliate in 1960.

Over the years, the two community leaders also remained very active in the A.M.E. Zion Church’s leadership and congregation.

‘Lift as we climb’

In the Press & Sun-Bulletin’s 1974 profile piece at the time of her retirement, Beccye explained the approach she had taken towards her life’s work: ‘lift as we climb.”

Note: The archived Press & Sun-Bulletin newspaper clippings used as primary sources for the reporting of this piece were provided by the Roberson Museum & Science Center. We thank the staff for their help in highlighting the importance of the life and work of Beccye Fawcett.