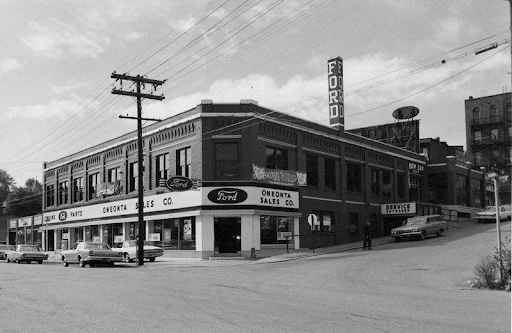 It’s Women’s History Month! And each Tuesday this March, we are honoring the vital, integral contribution of local women to our local communities all across south central New York — by highlighting some of the history surrounding their lives and their stories. This Tuesday, we’ve partnered with the Greater Oneonta Historical Society to explore Beatrice Blanding and her ownership of the Oneonta Sales Company.
The Oneonta Sales Company, founded by Riley J. Warren, first sold Ford cars in 1912 at 53-57 Market Street. 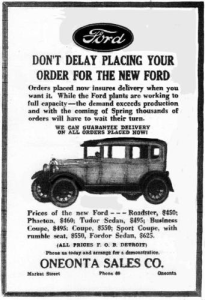 They then moved to their permanent location at 27-33 Market Street in 1920, on the corner of Market and Chestnut Street extension.

In 1925, Riley gave a piece of the business to his daughter, Beatrice (Donald) Blanding as a Christmas present.

And the business was booming. In just one year in the 1930s, they handled nearly 1,500 Ford units — cars, trucks, and tractors — and they were one of the largest Firestone accounts in the world.

In 1941, Riley J. Warren passed away. Both his wife, Lillian, and Beatrice continued the business.

The business was incorporated in 1949 with Beatrice as President and Lillian as Vice President. Lillian passed away in 1953. 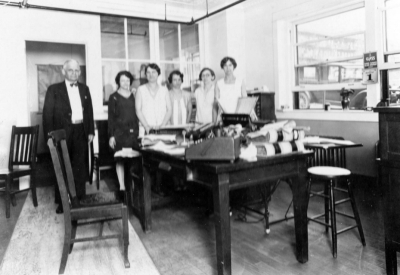 By 1949, the Oneonta Sales Company was advertising itself as the oldest Ford dealer in Otsego County.

With people purchasing cars for individual use, travel changed — not only just in Oneonta, but around the country. Personal vehicles provided people with more independence — to get to work, educational opportunities, and leisure throughout the region.

A thriving business, many additions were made to the original building. The first floor had a showroom, offices, and a counter for the parts department.

In 1930, The Daily Star announced that the Oneonta Sales Company was going to invite the public into their showroom where more than 3,000 people saw the new Ford car on exhibition. During that event, 200 orders for new Fords were made.

The Oneonta Sales Company was also often a successful bidder for municipality contracts for city vehicles, including trucks and police cars. In addition, the company delivered parts and tires across the surrounding counties. 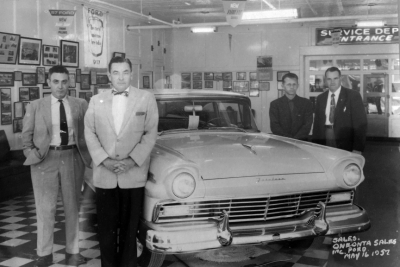 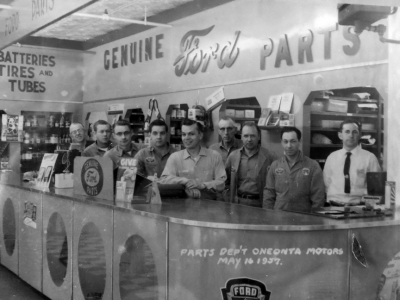 The rear of the building had space for radiator and mechanical work, with many very well-trained mechanics.

The company kept up to date on new innovative technology and mechanics were often sent out of the area for training. 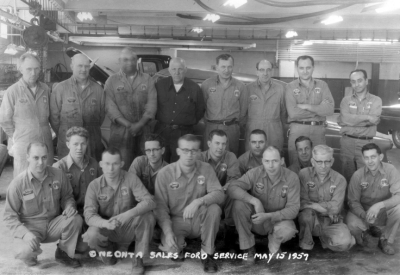 The second floor had a body shop and a large area for vehicle storage. Across Market Street was an additional building that did routine work like oil changes and tire mounting.

The back of the building had access to the railroad tracks and tires were delivered and stored there. The property at the head of Market Street was utilized as a used car lot.

Over the many years of business, all sorts of people came to work at Oneonta Sales Company, representing a diverse city of Oneonta.

As a business owner, Beatrice expected a good work ethic, honesty, loyalty, and promptness from her employees.

And, she made sure that she always had work for people to do — she was never known to lay someone off if business was slow.

Year after year, the Oneonta Sales Company kept an employee roster that totaled over 50 people. 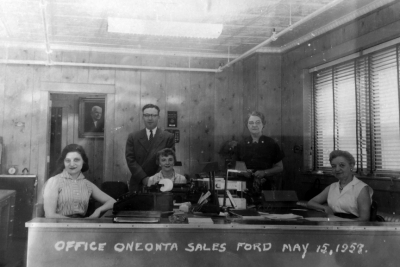 Beatrice also had a great rapport with customers.

She offered financing for customers through Citizen’s Bank (now Key Bank), with the company holding accounts for some customers who would come in each month to make a payment.

This personal connection with and convenience for the customer was an integral part of her business. 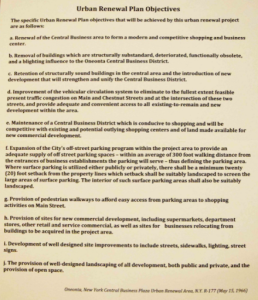 That year, many buildings on Market Street were razed for the future Clinton Plaza.

However, continued access to Market Street became increasingly difficult for customers, employees, and for the delivery of parts, tires, and new cars.

This was the time of suburban sprawl, and the size of Oneonta’s geographic footprint grew with many businesses moving to the southside.

Beatrice refused to move her business despite the hardships — she was determined to weather the change and remain in the building her father built.

Meanwhile, changes at Ford were brewing.

In response to suburban scrawl, dealers were now required to have a large building on the outskirts of communities with cars outside so that customers could see what was available as they drove by.

They also required dealers to accept all cars that Ford wanted to send them, regardless of specific customer orders.

This would move cars from the manufacturer to the responsibility of the dealer, who were charged interest for cars that were not purchased.

End of an era

But, these changes were completely different from how Beatrice operated her company.

She was committed to the city of Oneonta and wanted customers to be able to visit downtown and support local businesses while they waited for their car to be fixed.

In addition, Beatrice knew her customers and their needs personally. She paid for every vehicle upfront when it was delivered by Ford — and she refused to take vehicles she could not sell.

Because of this, the Ford franchise was terminated.

For the remainder of the time they were open, the Oneonta Sales Company operated a used car lot on Main Street as their inventory of used cars increased.

After her husband’s death, Beatrice continued to live in her 12 Walnut Street home. She maintained an active role in the company and the community up until her death in 1993. The doors to the Oneonta Sales Company were finally closed in 1997.

A special thank you to the Greater Oneonta Historical Society for the information about the Oneonta Sales Company available on their website, written by Karyl Sage, with photos provided by both Karyl Sage and Russ Padden.

This spring, the Greater Oneonta Historical Society is opening a new permanent exhibition that Beatrice Blanding will be featured in. We encourage you to check it out — as well as the society’s slate of online exhibitions, too!