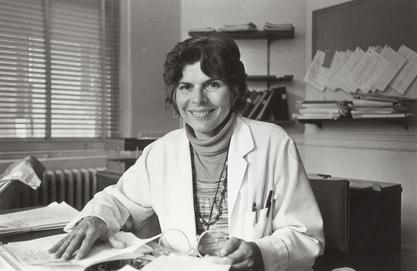 Dr. Helen Rodriguez-Trias, M.D., was born in New York City in 1929, but spent the majority of her early childhood in Puerto Rico.

After her family moved back to New York when she was 10, Rodriguez-Trias was faced with racism and discrimination as she grew up a Latina in the city — an experience that would shape the professional and personal activism throughout her life.

Rodriguez-Trias began her academic career in 1948 at the University of Puerto Rico, where she began to build her passion for activism, eventually becoming active within the campus’ Puerto Rican independence movement.

After returning to New York City, marrying and having three children, she decided to return to school to study medicine, a field that would allow the future physician to combine her two greatest passions: science and social justice.

In 1957, Rodriguez-Trias graduated from the University of Puerto Rico. Then in 1960, at the age of 31, she earned her medical degree from the university’s medical school. A short time later she gave birth to her fourth child.

Rodgriguez-Trias eventually returned to New York City in 1970, where she dove into community-based medicine at Lincoln Hospital, centered within a largely impoverished and undeserved Puerto Rican population of the South Bronx. There, she became the head of the pediatric unit.

During this time, Rodriguez-Trias became a prominent advocate within the women’s health movement, especially in the areas of reproductive rights and maternal health.

She worked to change the disproportionate sterilization of poor women, women of color, and women with disabilities — which was conducted not only at a much higher rate than their white, middle-class counterparts, but also often without consent.

Ultimately, Rodriguez-Trias’ work in this area led her to draft federal guidelines on sterilization, which required a woman’s consent to sterilization and required that they be offered in a language that they could fully understand.

In the 1980s, she served as the medical director of the New York State Department of Health of AIDS Institute, where she worked on behalf of women and children with HIV/AIDS.

Rodriguez-Trias became the first Latina to be elected president of the American Public Health Association in 1993.

Honoring her lifetime of work expanding access to public health services for women and children in minority and low-income populations across the United States — and around the world — Rodrigues-Trias received a Presidential Citizens Medal in 2001.

She passed away from cancer several months later at the age of 72.

“No one is going to have a quality of life unless we support everyone’s quality of life… Not on a basis of do-goodism, but because of a real commitment… it’s our collective and personal health that’s at stake.” —Dr. Helen Rodriguez-Trias